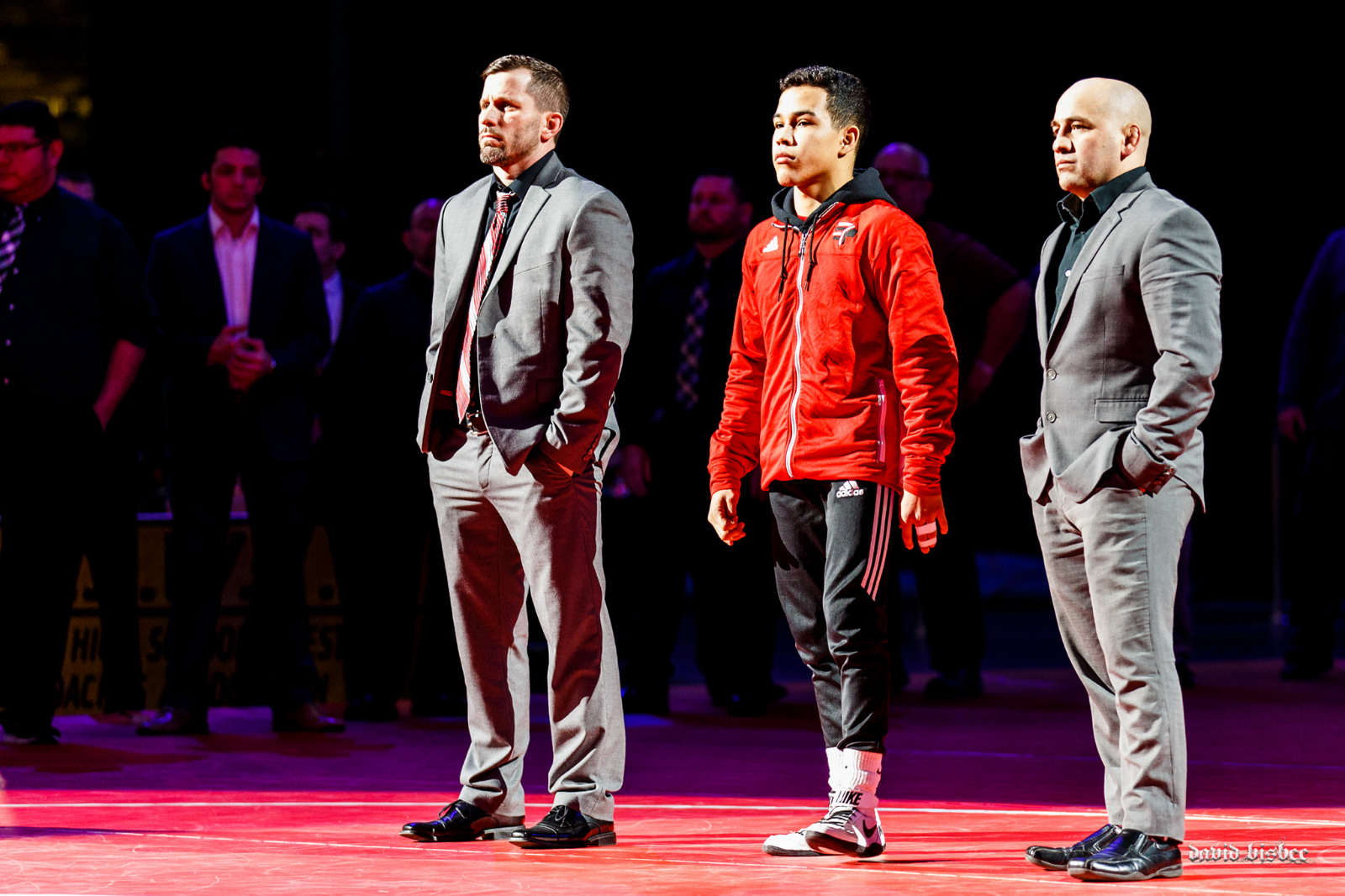 The Portage High School Wrestling Team will be searching for its next head coach as Leroy Vega has informed Athletic Director Fred Joseph and Assistant Athletic Director Michael Poynter that he will be stepping down effective yesterday.  Vega amassed 124 wins against only 35 losses as the head of the Indians.  Vega will be stepping down and hopes to continue coaching in the Portage system with the Portage Wrestling Club and hopes to start pushing for Portage to create a youth team that will travel the country going to national tournaments.  Vega coached 41 State Qualifiers, 15 State Placewinners, 7 State Runners-up, and 3 State Champions at the helm at Portage.

Vega is taking the step back from the head job to focus some much needed time with family and his business (Vega Oil Reclamation).  His two daughters compete in Gymnastics and his son Lydon is wrestling and doing jiu-jitsu at a Portage area gym.

Leroy Vega took the helm at Portage in 2011-12 when now Assistant Coach Pat Wilkins stepped down as Head Coach.  In his first year at Portage he went 17-8 as the head coach including winning a Sectional Title.  He followed that up with two more Sectional Titles the next two years and two more state placers.

In 2015, the Indians were 19-1 and their only loss came to the Merrillville Pirates.  Portage was not granted a bid for the IHSWCA Team State Duals.  The Indians won the Duneland Conference, Sectional, and Regional.  The Indians put two into the State Finals with Gaige Torres and Steven Lawrence.  Both lost their finals match and got 2nd.  Portage also had Kasper McIntosh place 8th.

In 2015-16, Vega led the Indians to a 14-4 mark and a 6th Place finish at the IHSWCA Team State Duals.  The Indians also went and wrestled three national powerhouses during the year including St. Edwards (OH), Oak Park River Forest (IL), and the host Detroit Catholic Central (MI).  They came out of that event going 2-2 also beating another Michigan power St. Johns.  The Indians lost out on another Conference Championship due to attending the national event as they sent the Varsity 2 to Crown Point which won the DAC dual season which accounts for 2/3 of the total DAC Championship.  They also won the Al Smith Invitational featuring some of the best teams within the state.  The Indians won another Sectional and Regional and ended up winning the East Chicago Semi State as well.  The Indians had three wrestlers wrestle under the lights at Bankers Life Fieldhouse in Gaige Torres, Kasper McIntosh, and Steven Lawrence.  Kris Rumph took 4th as well this year and the Indians took 4th as a team as well.

In 2016-17, Portage was 13-2 losing to Brownsburg and Avon finishing 4th at the Team State Championships.  The Indians captured the DAC dual season and the conference tournament as well as winning the Al Smith for a second straight season.  They were Calumet Sectional and Regional Champions, as well as placed 5th at the IHSAA State Tournament.  Individually Brock Peele placed 4th at 113, Colin Poynter placed 4th at 120, Kasper McIntosh placed 5th at 145, and Ismael Cornejo placed 6th at 170.  Kris Rumph wrestled under the lights falling to Hobart’s Brendan Black, finishing second in the state.

The Indians followed up their 13-2 season with another one.  The Indians lost to Indianapolis Cathedral and Brownsburg during the season.  The Indians placed 3rd at the IHSWCA Team State Duals and finished 4th at the IHSAA Individual Championships.  The team also took home runner up honors at the prestigious Brecksville Invitational Holiday Tournament finishing behind Detroit Catholic Central.  Individually the Indians took home 7th place at 120 by Brock Peele, 6th at 145 by Kasper McIntosh, and 5th at 152 by Donnell Washington Jr…

During the offseason between the 2016-17 season the Indian coaching staff hosted a bonfire to burn the suits that Head Coach Leroy Vega and Assistant Coach Eric Keith had worn for each of the previous year’s state finals matches.  The pair was 0-6 as coaches in the finals of the IHSAA Individual State Finals.  The pair purchased new suits and the rest is history.  Jacob Moran became Portage’s first state champion since 2010, when Sean McMurray, a 3-time State Champion, completed his high school career.  Not to be outdone, Kris Rumph added to the Indians party by winning his state finals match over Zach Melloh (avenging a loss earlier in the season).

The 2018-19 year was supposed to be a rebuilding year for the Indians as they lost ten seniors who competed in the state series the year before.  Sure, they had Jacob Moran, Brock Peele, Ricky Hegedus, and DJ Washington back, but that certainly could not carry them to success.  The Indians competed at the IHSWCA Team State Tournament and at the Washington (IL) Duals against some of the best teams in the Midwest.  The team also took 8th as a team at the IHSAA Individual State Finals behind Jacob Moran and DJ Washington.  Donnell Washington Jr. wrestled under the lights and lost to Jordan Slivka 12-7.  Jacob Moran became the third two time champ for the Indians, the first since Athletic Director Fred Joseph.

The Indians will move forward from the Vega era at Portage.  The Head Coach position will be posted within the next few weeks and we are confident that the right person will find this team primed and ready to fire again next year.  The Indians will bring back State Finals experience in Ty Haskins and Damari Dancy and Semi State Experience in Cory Hill, Tyler Herring and Isaac Hegwood.  They will also have guys like Bradley Conrad, Alex Cornejo, Raquan Perry, Christian D’Antonio, as well as a host of 8th Graders coming up to the high school.