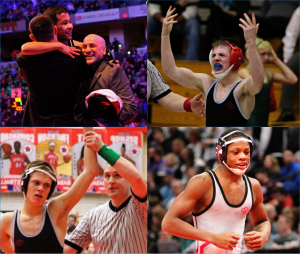 Coach Leroy Vega has high expectations for the Indian Wrestling Team. A year after graduating ten seniors who wrestled the IHSAA State Series the expectation is no different inside the wrestling room. The eighth year Head Coach of the Indians who has 113 wins against only 29 losses through his Portage career has qualified 37 wrestlers for the IHSAA State Tournament with 20 of those wrestlers placing.

The Indians took 4th at last years IHSAA tournament and took 3rd at the Coaches Association Team State Tournament after falling in the Semi Finals to State Champion Brownsburg 32-28 in a dual that came down to the last match. The Indians finished the season ranked 23rd in the nation and sent two wrestlers to Division I programs in the University of Minnesota (Kasper McIntosh) and the United States Air Force Academy (Colin Poynter). The Indians also bring back three placewinners from last year’s state tournament, Brock Peele who placed 7th at 120, DJ Washington who placed 5th at 152 after losing to three time state champion Brayton Lee of Brownsburg in the Quarterfinals, and returning State Champion Jacob Moran at 106. The last individual outside of the ten that graduated and the three that placed was state qualifier Ricky Hegedus at 113.

The off season in most sports mean one thing, relaxation. No more morning or afternoon practices, no more coaches yelling about the athletes not pushing themselves hard enough, no more anything but what they want to do. Not with this wrestling program. In this past off season, Portage Wrestlers have competed in ISWA Folkstyle State, ISWA Freestyle and Greco-Roman State, USAW Junior Duals, the IndianaMat Hoosier Preseason Open, Grappler Fall Classic, and Super 32 as well as also having three wrestlers invited to Ohio to practice with some of the top recruits in the country at the Hammer Camp.

The Future of Portage Wrestling

Coach Leroy Vega has said, the future of Portage wrestling is bright. We have an abundance of young wrestlers who are eager to put on that Portage logo’d singlet and represent Portage, IN. We have started getting recognition around the country and last year we wrestled against five top fifty teams in the country. Our goal is to continue the success that we have worked so hard for and I have the guys to do it. Jacob Moran, DJ Washington, Brock Peele, and Ricky Hegedus are guys that we are going to count on to score big points in national tournaments this year. Our youth knows nothing but winning as both of our middle schools finished 1st and 2nd in their conference last season. The young guys are ready and willing to put themselves through the ringer to get to our end goal, STATE CHAMPIONS.

And I cannot go any further without mentioning the staff that I have, Assistant Coach Eric Keith has such a rapport with the guys and will never stop trying to fix the little things to make us champions. Newcomer Andrew Bradbury is much like Keith and is going to be a huge addition to our program. Bradbury has head coaching experience (coached in Florida for the last five years) and has a great knowledge of technique. Pat Wilkins has stood in my shoes before as Head Coach and is definitely a key player to our program. Kyle Keith utilizes his knowledge of big guy wrestling to our advantage as Kyle has wrestled as a big guy since he was a kid. He also takes care of our tech stuff with our managers and even runs a pretty mean tournament when he has to. Our JV coaches Jose Torres and Thomas Baulos are key to our JV wrestling such a tough schedule. The guys that wrestle for them are seeing the states best competition each week. We send these guys to Varsity Tournaments and they go out and win against a lot of tough teams and individuals. You also could not find a better group of volunteers and there are too many to mention.

We expect to be competing for state championships year in and out. This team is no different. We have guys who have been eagerly awaiting their time to step out on that red mat in the middle of Bankers Life (Fieldhouse) with only spotlights on. We have a returner who has done that and we have thirteen other guys who are willing to do what it takes to get their chance.

Varsity 2: What is that about?

The Portage Wrestling Team’s JV has been competing in Varsity tournaments for the past couple of years. This team, known as Varsity 2, is known to wrestle with the best in the state. Last year, the Varsity 2 team was pressed into competition at the Cathedral Super Duals only a couple days before the event occurred. Coach Kyle Keith saw the competition and suggested that the team go and compete against Indianapolis Cathedral (then #3 team in Indiana), Bellmont (perennial powerhouse in 2A), among other highly ranked teams at the event. This also allows for our JV wrestlers who could be varsity on many other team’s rosters to get their opportunity to get some varsity experience. Coach Vega mentioned, “you have guys who are like Jacob Bondon last year, who wrestled under the radar because he was behind guys like Jeremy Torres and Anthony Maceo two years ago, that were able to use their Varsity 2 experience to their advantage. Bondon wrestled in one of our biggest meets of the year and placed 5th with a lot of great competition. He also was a Semi State Ticket Rounder after not being apart of the state roster before.”

Coach Leroy Vega never has a time where one of his staff is not available for extra work for the Indians. While it is regularly Vega, Eric Keith, and Andrew Bradbury doing the extra work, Vega has an experienced staff that is quite capable and available to make adjustments outside of practice time. His staff includes the three that were already mentioned along with Pat Wilkins, Kyle Keith, Thomas Baulos, and Jose Torres. These coaches are joined by a host of other volunteers that come to the room to help. These individuals are Sean McMurray (3x State Champ), Montell Pace (3rd place at 160 from Merrillville), Michael Torres (State Qualifier), TJ McMurray, Luis Acuna Jr. (State Qualifier), and I am sure that more will be in throughout the season. The wrestlers will also have the benefit of so many college wrestlers who have came through the Portage room when they come back for the Holidays in December and January.

Leroy Vega wrestled for the Indians becoming Portage’s first two time state champion (1996 at 103, 1997 at 112). He continued on to the University of Minnesota became a three time All-American placing 5th in 1999, 5th in 2000, and 3rd in 2001. He is a member of the Indiana High School Wrestling Coaches Association Hall of Fame as a wrestler and has guided ten Indian wrestlers to continue wrestling in college (with that number expected to grow this year with Brock Peele and Ricky Hegedus). Vega now owns Vega Oil Reclamation (VOR Oil) and lives in Portage with his wife (Sarah) and his three children.

Eric Keith wrestled for the Indians and won the 2000 140 pound state champion with a 3-2 Sudden Victory decision. Keith was a 4 time state qualifier and went on to wrestle at Michigan State University and Purdue University. Keith is married to his wife Valerie and lives in Portage.

Andrew Bradbury wrestled for the Indians and was a two time state place winner, including the Runner-up in 1999. He also placed 7th in 1998 at 119 pounds. Bradbury went on to wrestle at Neosho Community College where he was a NJCAA National Runner-Up at 125 pounds. He then transferred to Harper College where he finished 4th in NJCAA. After completing his Associates Degree, he moved on to Lindenwood where he finished his schooling with back-to-back Division II National Championships at 125 pounds. Bradbury also has many years of coaching experience, coaching in Las Vegas, Nevada, at Lindenwood University, and at Seminole Ridge, Florida. He is in his first year with the Indians.

Jose Torres wrestled for the Indians and was a state qualifier. He is the JV Head Coach and has held that position for the past 7 years. He lives in Gary and has one child.

Thomas Baulos wrestled in high school in Illinois. He went to Illinois State and is a teacher in the Mathematics Department at Portage High School. He is the JV Assistant Coach. Baulos lives in Valparaiso with his wife (Infinity).

A Loss of Our Own

This off season we lost a member of our wrestling family. David Anthony Torres, a past two time seventh place finisher at 215 in 1997 and 1998, passed away August 27, 2018. He was an active member of the volunteer coaching staff with the Portage High School Wrestling Team, a former teammate of coaches Vega, Eric Keith, Andrew Bradbury, and Pat Wilkins, as well as the brother to Head JV Coach Jose Torres. Dave ‘Tony’ will be missed by the Portage Wrestling Community and we thank him and his family for all of the time that he worked with our athletes.

Exciting Meets for this Year: