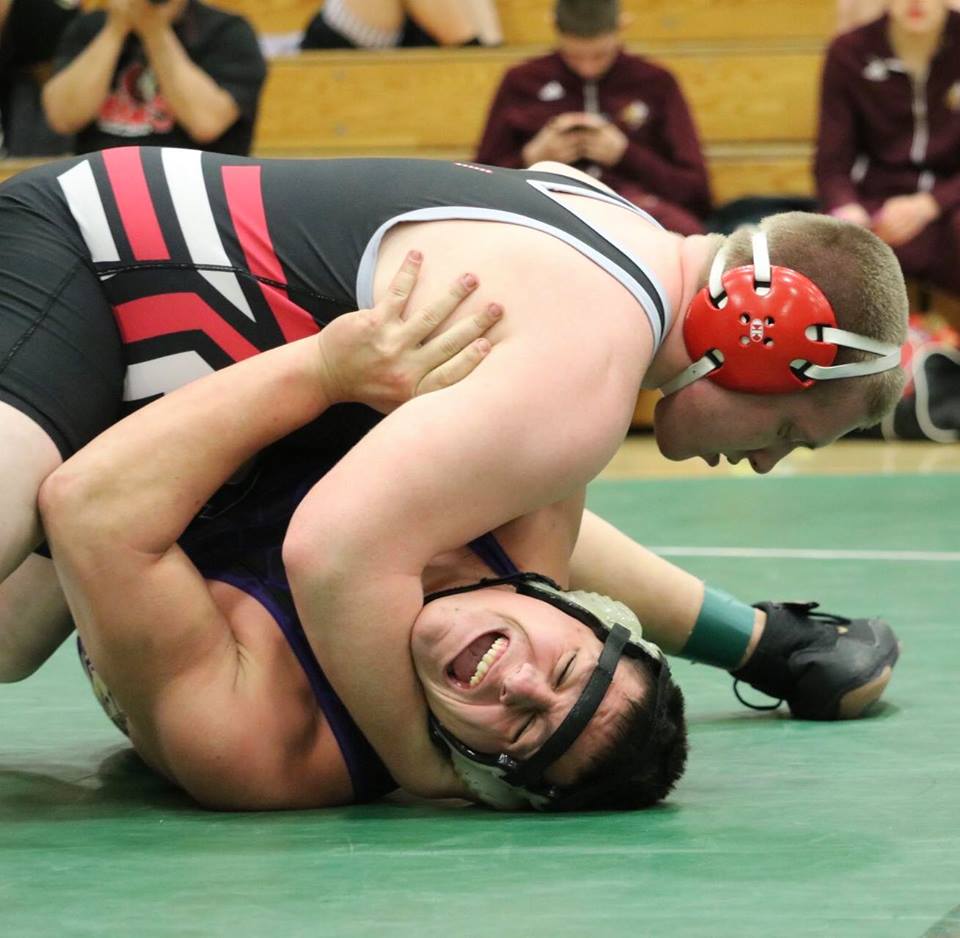 The Indian wrestling team will be coming into the Hobart Wrestling Regional after winning the Griffith Sectional by 78.5 points over second place Hobart.  The Indians had 11 total individual champions, two runners-up, and a third place finisher.  Joining the Indians will be the Merrillville Pirates who won their respective sectional (East Chicago Central) by 90 points over second place Gavit.

106- Jacob Moran ran through the competition at Griffith wrestling his two opponents for a combined 3:15.  He pinned Hobart’s James Corgan and Highland’s Adam Ackerman.  Up this week will be an expected matchup between IndianaMat’s #1 and #2 state ranked wrestlers.  Jacob is currently ranked #1 and Merrillville’s Martin Cruz is ranked #2.  An interesting note, Jacob by weighing in under 108 lbs. will be considered a Semi State Qualifier as he does not have a first round opponent.

113- Ricky Hegedus took the championship at Griffith as well with a 6-4 win in the finals over Andres Russi of Lake Station.  Hegedus also pinned Hobart’s Cristian Padilla in the semis at Griffith.  Up this week will most likely be Juan Maldonado of Merrillville, and the winner of Derick Gosa of Hammond High or a rematch of the sectional final with Andres Russi.

120- Brock Peele fell to Tylor Triana of Hobart in OT at Griffith.  Peele had a :53 fall over Pablo Russi to get into that match with Triana.  Brock will face Ebrardo Azpeitia of Hammond Morton in the semis and likely to face Tylor Triana in the finals once again.

126- Colin Poynter will look to build on his Sectional title over Nathan Schammert of Hobart.  He is likely to wrestle Schammert or Daniel Mora-Diaz of Hammond Clark if things fall the way that they should.

132- Alec Luna took the Sectional title at Griffith as well with an 8-3 decision over Quentin Gomez of Hobart.  He also had wins over Jake Hirchak of Highland and Caitlin Clark of Calumet.  This week he will have Jacob Maldonado and with a win there he would face off against Reese Rodriguez of Morton.  Luna and Rodriguez wrestled to a 6-3 match two weeks ago at the Garry Burkhart.

145- Kasper McIntosh lit up the scoreboard in two of his matches and ended up pinning his Quarterfinal and Finals opponents.  In his semis match he took a 17-2 technical fall.  This week for Kasper he will likely see Tyler Turley of Hobart and then Cole Cervantes of Griffith or Devin Pope of Merrillville.

152- Donnell Washington Jr. followed Kasper’s model of winning with two falls and a technical fall of his own.  DJ pinned his quarter and semifinals opponents and took a 19-3 technical fall in the finals over Hobart’s Michael Hunter.  This week DJ will likely see Aaron Griggs of Merrillville in the finals.  Griggs and DJ wrestled to a 6-5 match during the dual between Portage and Merrillville.

160- Zach Nugent was the lone Indian that did not wrestle for the championship at Griffith.  He fell to Dante Colza V in Overtime on a controversial call.  He wrestled back and placed third and set himself up with a manageable bracket to get to Semi-State.  This week he will have Merrillville’s Ryan Hyland in the Quarterfinals, which with a win would set up another meeting with Colza V.  If Nugent takes the match over Colza he would likely see Merrillville’s Malik Hoover of Merrillville.

170- Drake Guerrero lost to Zach Fattore in the finals at Griffith.  He is set up on the opposite side as Fattore for the regional at Hobart.  His first opponent will be Paul Metrich of Hammond Gavit and will likely see Cody Crary in the Semifinals.  With a win in the semis he would likely see Fattore again.

182- Jeremy Torres took the Griffith Sectional title over Bradley Groover of River Forest.  Up this week he will likely see Jamari Washington of Hammond Gavit in the semis and likely to see the winner of Groover and Tyjonn Lockett of Merrillville in the finals.

195- Jacob Bondon scored what some would consider an upset pinning AJ Fowler of Calumet in the finals at Griffith.  Bondon would need to dispatch Dennis Weston to set up a potential rematch of the sectional championship AJ Fowler.

220- Chester Swopes took his sectional championship with three decisions.  In the finals, he defeated state ranked James Lewis of Calumet 7-2.  This week two other ranked individuals come to Hobart to join Swopes and Lewis.  Chester is set up to have a semifinal matchup with the winner of Caleb Thomas and Sam Perez.  In the finals he would more than likely see Brandon Streck of Merrillville.

285- Ricky Beehn won the sectional title in his first appearance.  Beehn started his day with a 1:06 fall over Adam Warren of Andrean and won 3-1 over Hobart’s Ryan Pisarski and then 6-2 over Calumet’s Keiloun Martin.  Up this week for Beehn will be a Semifinal match with either Pisarski or Myles Mitchell and then a finals match with either Keiloun Martin or Anthony Atria of Merrillville.

The Indians are the favorites to win the regional.  Merrillville however has some firepower that can definitely keep thing interesting throughout the day.  Hobart also is a formidable team that will score some points with some of their studs.

Wrestling starts at 9 AM at Hobart High School in their Main Gymnasium.  Semis will begin at approximately 10:30 with the Finals starting at approximately 1 PM.  Come out and see your Portage Indian Wrestling Team at the Regional Championships.