The Willowcreek Braves Girls Track and Field team took two of three from the Thomas Jefferson Vikings on Thursday night in Valparaiso.

In the 6th grade meet, the Vikings beat the Braves by a score of 60-36 dropping the Braves to 0-5 on the season.  Izzy Shields won the 75m hurdles, the high jump and teamed with Gabby Shields, Genisis Lopez and Kate Penrod to win the 4x400m relay.  Jade Huley and Gabby Shields went 1-3 in the long jump.  Gabby was also second in the 1600m run.  Aleksandra Ramon and Genisis Lopez got 2nd and 3rd in the open 400m dash.  Maya Lavendusky and Jewel Albee went 2-3 in the shot put.  Sydney Curry  was third in the 200m, Avery Ables third in the 1600m, Jade Huley third in the 100m and Madison Hart was third in the hurdles. 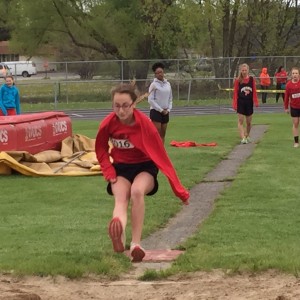 The 7th grade meet saw the Braves improve their overall record to 5-1 by beating the Vikings 54-42.  The Braves won every individual event in the meet and Jaedyn Lowe, Annalise Franklin, Diamond Howell and Joanie Warmick won the 4x100m relay.  Gina Butz won both the high and long jumps while also placing third in the 400m.  Jaedyn Lowe won the 100m and the 200m dashes.  Morgan McCulloch won both the 1600m and the 800m runs.  Jadden Hibbard and Destiny Gonzalez went 1-3 in the shot put.  Diamond Howell won the 400m dash, while Annalise Franklin and Krystin Vanderloot went 1-3 in the hurdles.